For the past year GoPro has been fighting the perception that their best days are behind them. After unsuccessfully entering the drone category, can the Hero 6 show that GoPro still innovating and worth the upgrade over the Hero 5?

The new GoPro Hero 6 has taken the features that made previous models so popular and taken them to new heights, utilizing a new custom processor chip and a new video codec (H.265) among other things. With the arrival of the GoPro Hero 6, GoPro has provided a whole new world of possibilities for on-the-go shooters. 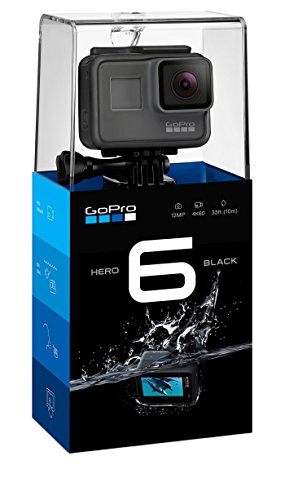 In terms of physical design, the GoPro Hero 6 bears a striking resemblance to the Hero 5. In fact, they’re so similar that it may be difficult for you to tell them apart! Like the Hero 5, the Hero 6 has a 2-inch touchscreen on the back that makes for an intuitive and easy experience.

However, this is where they begin to diverge. The Hero 6 offers an improved quality display, with colors and images on the touchscreen standing out in sharp contrast, making it more enjoyable on the eyes while shooting.

The touchscreen also features a better level of responsiveness. In older models, some swipe gestures would sometimes fail to register, meaning you would have to waste time swiping until the touchscreen picked up on the motion. The sensitivity of the touchscreen on the Hero 6 is much better, with swipes being registered with more consistency.

The camera itself is still presented in its classic small rectangle shape, measuring at 1.8 x 2.4 x 1.3 inches and coming in at 4.2 oz. The outside is coated with a rubberized casing, making gripping the camera easier than ever and helps to further waterproof the camera.

Like previous GoPro models, the Hero 6 is also waterproof up to 10m underwater, without an additional case. Due to this, the battery, MicroSD, and connection ports are more heavily reinforced to ensure that no water gets into the camera. As a result, it is a bit more difficult to access these ports, since you’ll need to press a release button before sliding any of the ports open.

Overall, the design changes little compared to GoPro Hero 5 while improving on aspects that left customers wanting more, such as touchscreen sensitivity. Apart from offering an intuitive and comfortable experience, this also means that many of the accessories made for the Hero 5 will work with the Hero 6!

The Hero 6 offers improved 5GHz wifi connectivity, which means your files will transfer up to 3x faster than they would with a traditional 2.4GHZ wifi connection. Of course, if you’re always shooting in 4k, this could still mean you will have to wait awhile to transfer over all of your files. This improved wifi connectivity can also cost you some battery life, so I recommend transferring your files over only when your camera is plugged into a charger.

Like past models, the Hero 6 offers integration with the GoPro Capture app, meaning you can easily share your best moments to social media or through your email or text messages. Additionally, you can also control your camera through the app, allowing you to adjust your settings and stop and start recording remotely.

GoPro has also recently bought and rebranded the Quik app, using it to develop a new feature for generating content called QuikStories. Using the new GP1 processor, it is able to analyze information it receives through sensors such as microphones, the GPS, and gyroscope, among other things. The app then plugs this information into its built-in algorithms, allowing it to automatically generate a highlight reel of the best moments of your footage!

The app isn’t perfect, but it is a quick way to get some sharable content. If you’re performing stunts by yourself, without the roar of applause for the camera to pick up on, or you pull off an amazing run in low light settings, it may not pick up on these clips and include them in your highlight reel.

It seems as if you can control anything with your voice these days, and the Hero 6 is no exception. Fortunately this feature truly is useful rather than just something that was tacked on. The most useful way to use this feature if you have mounted the camera on something out of reach where consistently touching the camera becomes a hassle.

Besides just being able to control the camera functions, you can tell your GoPro when a HiLight event occurs so that it can mark it for the QuikStories integration.

Voice control currently works in 10 languages and for a number of features.

Video and image quality on the Hero 6 has significantly improved due to the introduction of the new GP1 processing chip. This results in improved color and dynamic range, meaning that colors that used to look faded out now pop more than ever before, making your videos more visually appealing.

In addition, low light performance has been significantly improved with the Hero 6. Recorded videos can quickly transition from bright to dark, and vice versa, meaning that the Hero 6 is more readily equipped to shoot in low light settings, such as dawn or dusk.

In addition, video quality continues to improve with the 3-axis internal stabilization. The internal stabilizer helps to remove natural shake that comes when walking or running, leaving you with an smooth video that will make your viewers feel like they’re right there with you!

The Hero 6 has a battery life of 70 minutes from 4k at 60 fps on the high end of the scale, while on the low end you can squeeze about 110 minutes from 720p at 60 fps. This isn’t the best battery life out there, barely improving on the battery capacity of previous models, so carrying spare battery cells or an extra charger with you wherever you go is a good idea.

Luckily, the Hero 6 can house the same batteries as the Hero 5, so if you happen to have any old batteries lying around from your previous model, you can swap them out no problem. If you’re short on cash and don’t have any extra batteries around the house, you can opt to buy inexpensive third party batteries, which operate in a similar capacity to GoPro’s own branded ones.

The Hero 6 charges from a USB-C connection, so chances are you’ll have a spare cable available to you everywhere you go. Although the battery life is less than impressive, this coupled with the option to buy spare batteries should be enough to keep you shooting all day.

If you are looking to shoot 4K at 60FPS than the GoPro Hero 6 should be your choice. GoPro continues to make improvements to the category they created and the Hero 6 is no exception. Improvements to the video quality and feature set make the Hero 6 the camera that is setting the bar for the whole action camera category.

The Hero 6 may look exactly like the Hero 5, but the overhaul of its interior is where it really shines. The stabilization is leaps and bounds ahead of the Hero 5, meaning that you may not need a 3rd party gimbal to get that smooth, buttery video you’re looking for. In addition, you’ll find that the introduction of the GP1 processor and Quikstories feature will mean you won’t have to do as much post-production editing, freeing up your time to shoot more.

However, if you’re on a budget, the Hero 5 can be found for $100 cheaper and is still a quality in its own right. You’ll have to put more work into it to get the same results you would get effortlessly from the Hero 6, but it can be done. Overall, the extra features of the Hero 6 justify the price difference if you can afford it.

The GoPro Hero 6 sets the bar again for what an action camera should be. Now featuring 4K video at 60FPS, improved video quality, faster wifi, and better stabilization, this model is well worth the upgrade.

Features
9.5
Design
9
Video Quality
9
Image Quality
8.5
PROS
CONS
Add your review  |  Read reviews and comments
We will be happy to hear your thoughts

8 Creative Ways to Use Your GoPro

What is Electronic Image Stabilization (EIS)?