Sony is no stranger to the world of action cameras. Since introducing the Sony Action Cam HDR-AS10 in 2013, Sony has proven that it can hold its own in this increasingly competitive arena. Their newest flagship model, the Sony FDR-X3000, is no exception. Equipped with Sony’s Balanced Optical SteadyShot (BOSS) technology, the FDR-X3000 is a versatile, full-featured action camera that is worth paying attention to. 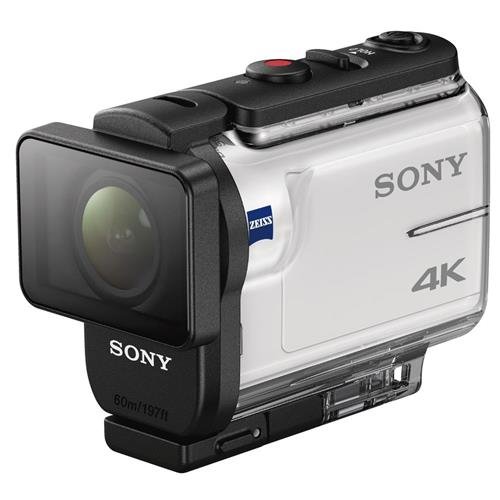 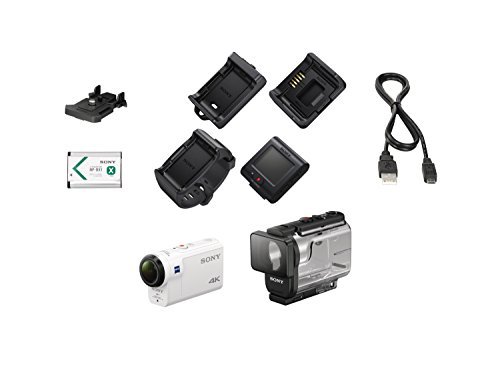 Going against the boxy action camera trend, the FDR-X3000 features a camcorder-like shape consistent with Sony’s other models. This ergonomic design makes it easy to hold, and, thanks to BOSS, produces pleasingly steady walking shots.

The Sony FDR-X3000 has a glossy white finish and weighs in at 114 grams. The camera itself is water-resistant up to IPX4, but in the included underwater housing, it is waterproof to a depth of 60 meters.

Where previous Sony models have had two recording lights, the FDR-X3000 features three -- on the front, back, and top -- and beeps when beginning to record for clear indication from all angles.
The on-body controls are easy to use and work well even when in the waterproof housing. At the top are the power and record buttons -- the larger record button protrudes whereas the power button is recessed, so you are not likely to accidentally switch it off while you’re trying to record. On the side are a display and three buttons to control the various settings.

The back side of the camera has the lock switch for the battery, which is easy to use and change but requires caution in order not to accidentally expose this sensitive area to water or dust. Also on the back are the camera’s three ports -- a micro-HDMI output, a micro-USB port for charging and data transfer, and a 3.5mm audio port for an external microphone.

At the bottom of the body are a tripod mount and memory card slot. The Sony FDR-X3000 takes either Sony’s M2 memory stick or a microSD. As with any camera that uses microSD, however, always remember to check that you’ve put it in the right way before filming!

The only connectivity problem that you are likely to have with the Sony FDR-X3000 is deciding what you want to do with all of the possibilities. With Sony’s PlayMemories app, you can connect the camera to your iPhone or Android via built-in wifi connection for live view and file transfer. Be careful though, with the app you can only transfer MP4 files and not Sony’s XVAC-S format.

The app gives you control over most of the camera’s functions such as mode switching, exposure settings, and shutter and will also allow you to connect up to four other cameras for simultaneous multi camera control. In addition to Sony’s app, you can also run livestreams via Ustream when connected to wifi or tethered to your phone’s data.

Also available from Sony is their free Action Cam Movie Creator application for Windows, Mac, and mobile. This app allows for easy video editing in either of the camera’s video formats and can also create videos from any timelapse photos you’ve taken. Additionally, using the GPS data collected from the FDR-X3000, you can choose to overlay route, speed, or speed over time data on your videos.

The Sony FDR-X3000 comes with a ZEISS Tessar multi-coated lens and a 1/2.5-in 16:9 Exmor R CMOS sensor and can shoot up to an 8.2 megapixel resolution, which makes it no surprise that the videos and pictures it produces are superb. Coupled with Sony’s improved barrel distortion and you get an image that hardly looks like it was taken with an action cam -- that is, the fisheye effect is barely perceptible.

Thanks to its BIONZ X image processor and the ability to manually adjust white balance and shutter speeds, the Sony FDR-X3000 performs well in a variety of situations, not just outdoor in daylight. In well-lit environments, the videos it produces are sharp, accurate, and properly exposed, and even in dimmer situations it isn’t too noisy.

The standout feature of the Sony FDR-X3000 is its Balanced Optical SteadyShot (BOSS) image stabilization. BOSS relies on a floating lens mechanical stabilization unit rather than software-based correction, which makes the end product significantly more stable. Sony has been putting out iterations of this technology for years now, but the FDR-X3000 is its most compact and most effective version yet. Even when walking, BOSS allows for smooth video capture that works at any frame rate.

Unlike most action cameras, the FDR-X3000 records audio in stereo instead of mono, allowing for better sound when you are not using an external microphone.

According to Sony, the FDR-X3000 can record at 1080p for up to a respectable 2 hours and 15 minutes, while recording at 4K will give you about 60 minutes of battery life. However, the battery is self-replaceable, which allows you to switch out for a spare rather than having to stop and charge.

The Sony FDR-X3000 comes with underwater casing, which waterproofs the camera to a depth of 60 meters.

Without a touch screen, Sony’s live view remote lets you see what you are recording.

Alongside the FDR-X3000, Sony also released the FDR-X3000R, which is the same model with the inclusion of a live-view remote control. The remote attaches to a wrist mount and is worn like a watch. With buttons to power the camera on or off and adjust zoom and a display that mirrors the menus on the body of the camera, using the remote feels like a seamless extension of the camera. You also have the option to detach it from the included wrist mount to use it with Sony’s separately available accessories such as its shooting grip, hand grip/tripod, and finger grip.

Some issues with the remote, though, are that it can take a few seconds to power on, which, depending on the situation, could potentially cost you your shot. Additionally, the viewing angles are rather limited, and you are forced to dock it in order to charge, meaning more things to carry.

Sony has refused to compromise image or video quality with their action cameras, and the FDR-X3000 is no exception. Video quality, stabilization, and still photos all perform as best in class.

In the end, the deciding factor on whether or not you should buy this camera is likely going to be the price. At $399.99 ($549.99 for the FDR-X3000R), the Sony FDR-X3000 is one of the most expensive action cameras available. However, if you can afford it, the Sony FDR-X3000’s multitude of features and excellent video quality more than make up for the price.

Sony has avoided the boxy action camera design to focus on delivering a camera that delivers excellent video and image quality.

Features
8.5
Design
8
Video Quality
9
Image Quality
9
PROS
CONS
Add your review  |  Read reviews and comments
We will be happy to hear your thoughts

8 Creative Ways to Use Your GoPro

What is Electronic Image Stabilization (EIS)?